More signs that Allapattah is the hot place to be: the heir to the Bill Seidle auto dealerships has put a portfolio of three tracts equaling 7.6 acres on the market. Asking price: $18.35 million.

The parcels belong to Bob Seidle — son of the late Bill Seidle — and Bob’s wife Tracy. Some are currently home to small shopping centers and parking lots. They are zoned T6-8, which means they can be redeveloped with buildings up to 8 stories tall, said listing agent Cesar Carasa of One Stop Realty. They are located in the city of Miami.

One parcel includes five folios along the north side of NW 36th Street, beginning just west of NW 27th Avenue to 29th NW Avenue on the west and extends north several blocks.

The second parcel includes eight folios along the north side of NW 36th Street, beginning just west of NW 31st Avenue to NW 32nd Avenue; it extends two blocks to the north.

The third parcel includes 11 folios on the south side of NW 36th Street between NW 27th and NW 28th Avenues. 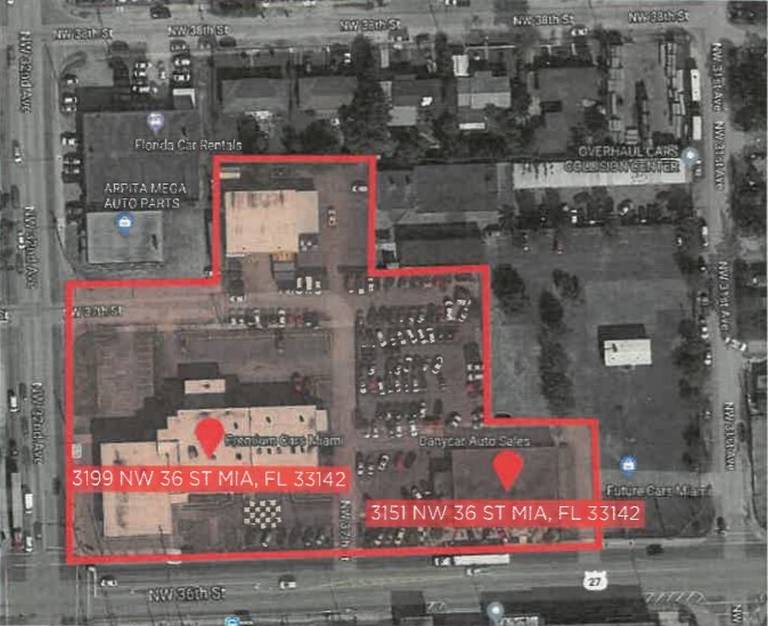 The properties were placed on the market two weeks ago and have attracted six inquiries thus far.

The central location of the parcels — a 12-minute drive to Miami International Airport and a 20-minute drive to South Beach — make them ideal for residential redevelopment, said Carasa. He said, “That section is very well located for the middle class.”

“People can’t afford to pay a lot of the rentals. Apartments in that part of town would be cheaper than other areas like Brickell,” said Carasa.

The neighborhood has attracted long-term residents.

Carasa said, “Because it’s a central location, I’ve seen people move from Homestead to here because of traffic.”

Tired of handling leases, the Seidle family decided to sell at market price of $54 to $55 a square foot. They hope to sell the three parcels for $18.35 million but are willing to consider individual sales.

The per-square-foot listing price is comparable to other area transactions, said Carlos Fausto Miranda of Fausto Commercial. But the total amount is rare, he said.

The listing price a square foot between $54 and $55 is comparable to other transactions in the area, said Carlos Fausto Miranda of Fausto Commercial, but what is unique is the amount of land offered in the portfolio.

Over the past year, the area just west of Wynwood has become Miami-Dade’s new real estate darling. The Rubell Family Art Collection has abandoned its former Wynwood space in favor of Allapattah, and art collector and developer Jorge Perez also will open a private museum this fall. Developer Robert Wennett has announced a massive residential-mixed use project in the area designed by star architect Bjarke Ingels, and developer Moishe Mana has also expanded his Allapattah holdings.

“It’s a great but underutilized neighborhood,” said Miranda. It’s one of the few east-west corridors that takes you straight from the beaches to the swamps.”

Due to increasing interest in the area, Carasa said, “For commercial properties it usually takes a year, but, for these it would take no more than two to three months to sell.”